The problem with sharing a bridge: sometimes your bedfellows need to do repairs. And because of the Union Pacific Railroad planned repairs, TriMet had to detour buses off the bridge and run MAX shuttles overnight for the last two weekends. Being the curious investigator I am, I decided to see what happened for myself.

The situation: On February 6, 2014, TriMet emailed a service alert informing the public that Union Pacific Railroad would be doing scheduled maintenance overnight for the two weekends immediately approaching. Because of the Snowpocalypse, UPRR deferred the first weekend of work to a future weekend, later determined to be the weekend following the original second weekend. On February 13, TriMet sent out the email with the finalized times. 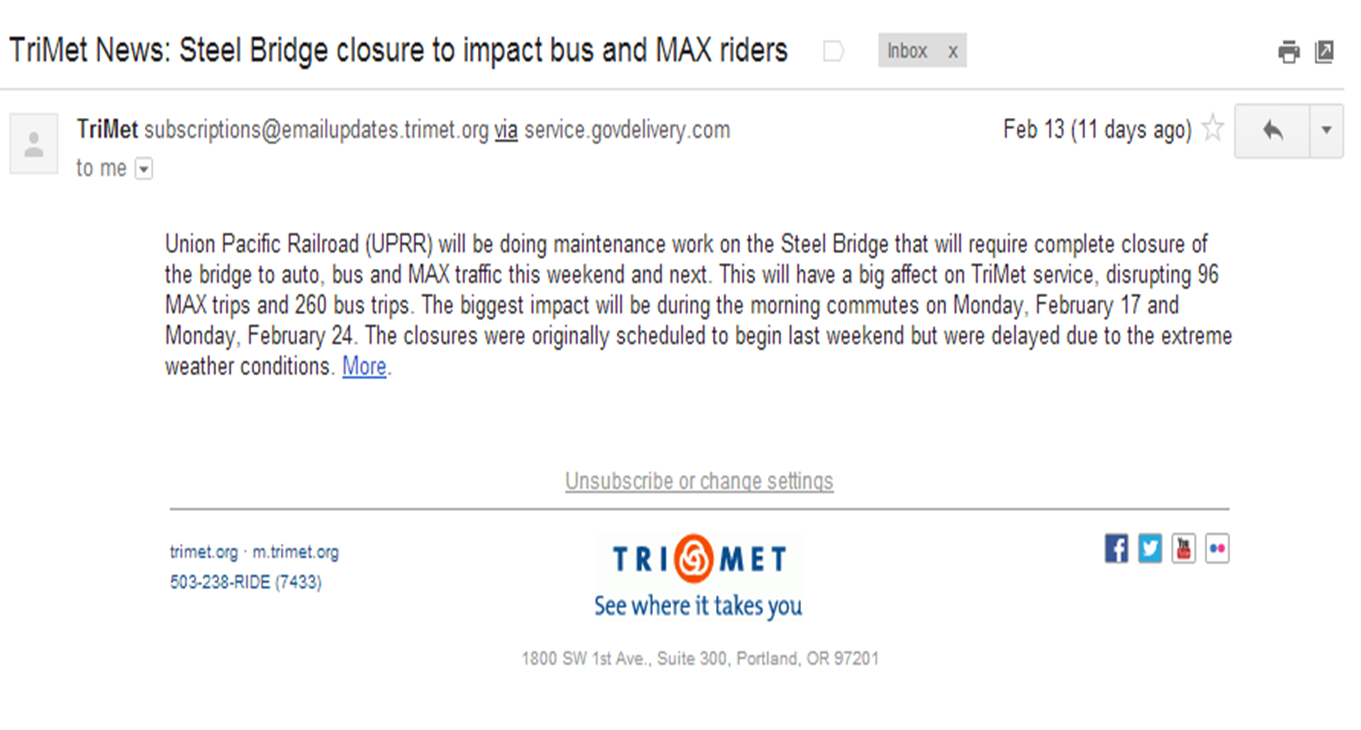 Overall, the service disruption was expected to last from 11pm-8:30am the nights of Saturday and Sunday for both weekends. And yes, you counted correctly: this meant the disruption was to run into the Monday morning rush hour. Fortunately, the first weekend was Presidents' Day, so we had a lighter ridership load by default. But this would mean significant impact for the second Monday, especially if things didn't go right and there were delays. (You can see the real news release from TriMet's website here.)

What we learned: I decided to head down there for the second Monday rush hour and observe how the bus bridge was designed, how MAX trains were being moved through and turned around, how riders were reacting, and what supervisors and customer service personnel were doing to make it all work. I took Lane along and we traveled down to the Steel Bridge to experience the bus bridge for ourselves and share with you what happened over the last two weekends.


(Special thanks to Lane for making this video so cool and informative. It sure beats me just writing another essay.)
Posted by Patrick Stanley at 10:55 PM 3 comments:

It Snowed A Little

Actually, since the last blog post, I had basically lost interest in TriMet temporarily. You see, unlike some other bloggers seemingly (you know who you are), I actually have other hobbies and things that I want to focus my time and attention on. I am a musician, songwriter, and music producer who has dozens of songs waiting to be recorded. I also am an aspiring author with a story I've been playing around with in my head for the last ten years. And this is all happening before Spring Training starts (pitchers and catcher reported Wednesday -- woot!).

So, I have a legitimate reason for dropping out like a call on a cheap cell network. But these times of apathy toward TriMet tend to reignite the fire in me for what I love about it. I am so excited for March, when the new sign-ups go into effect and I can do my quarterly study of each and every block in the system (I'm put that off for a few quarters). I have been refreshing my memory regarding bus stop lists, and am happy with the results. Yes, you read that right. I am in the process of memorizing every stop on all 80 bus lines. At the highest point I had only 12 lines left to go; it looks like I've only completely forgotten one, Line 71. (Can you blame me?)

But the Snowpacalypse we experienced over the past weekend helped me focus my attention back on the 'Met. I inadvertently got stuck in the mess myself with my father. We went out Saturday to the Portland International Auto Show at the Convention Center. That was a lot of fun. We decided afterward to venture out to Clackamas Town Center to eat and we were shocked to see what a ghost town it had become. By my estimation, 70% of the businesses were closed, including Nordstrom! Quite a strange and slightly disappointing sight, to say the least. But that meant we had to venture home on the MAX.

Oh, did I mention this was Saturday evening right before everything stopped?

Well, if it wasn't for the great people at the TriMet Scanner Twitter feed, we would have certainly gotten stuck somewhere along the line. But we were able to divert to a bus in time and get back to our car at the Park & Ride. On the plus side, I finally got to share a bus ride with Dad (he has heard me talk about buses incessantly for the last 14 years; thought it was about time). But by the time I walked in our house I found out quite shockingly that MAX had shut down. Like, totally shut down. I'm pretty sure that this is the first time in the 28 year history of MAX that this has happened.

Did TriMet do a good job of handling the situation? Some yes's and a ton of no's. Yes, the people on the front lines (mostly union workers and some non-union staff) did risk their lives to try to keep people moving. Think about all the rail operators with their trains that they couldn't move, trying to explain to people why they would have to wait for buses to come pick them up the rest of the way. Think about the hundreds of bus operators who pushed through the snow and ice for three days watching their schedules get as much as 400 minutes late, trying to remain as flexible as they could while still trying to serve the customer. And think about the supervisors who were stuck in terrible positions to have to make decisions like shutting down MAX, taking into account all the people still riding in the trains trying to get home. There were a lot of people who did their very best to make the system perform as best as it could given the circumstances.

But then there's Dan Christensen's tweet that says it all:

TriMet thinks their Titanic of a rail system will never sink. But it sunk. It's kind of hard to deny that they had to stop MAX, but they won't come out and say "Our rail system may fail." If they acknowledged that, we would have more spur pocket tracks for dead trains, more third rails for bypass, and a faster response when a bus bridge is needed. But instead, we have ice building up on the rails faster than what we expected (because there apparently is no worst-case-scenario in the planning stages) and then it's left in the hands of the supervisors on the streets to say, "Yep, this train ain't moving." Something's wrong with this picture.

Many buses went on snow routes. This makes sense, because there was, uh, snow. But somehow one service cut slipped through the cracks:

The 78 went on snow route, which meant it did not go past Tigard TC either, but this makes sense since everything is hills along that route. And this was Saturday, so no other lines were coming into Tualatin. What does this mean? The entire city of Tualatin was cut off from the TriMet system. Let me show you:
The dark lines are the bus lines that were running that Saturday. The red dashed line is the part of Line 76 that was cut off for 30 hours. The yellow area is the area that was not served by TriMet that day. The people in this area are paying the same taxes as everybody else. And if you notice, the entire cities of Tualatin, Rivergrove, and Durham are in this excluded area.

Poor planning? I'd say. I bet it had to do with the the snow being too heavy to get buses through or something like that. But it's SW Hall Blvd! It's flat and straight! It's a main arterial! Why wouldn't it be clear enough for a heavy rectangular box on chained wheels to get through? And if it wasn't clear enough, then send the bus down Pacific Hwy and have it cut across Tualatin-Sherwood Rd. Just get it to Tualatin somehow! (I should add that according to this map at TriMet's website, the snow route for Line 76 is the same as the regular route!)

So, again, we see where TriMet failed again. Weather does happen. Closures do happen. And occasionally, things break. So instead of pretending your ship is unsinkable, be forthright about the fact that your system does break and encourage cooperation to find ways to improve it.

And also, don't forget the cities that are paying taxes to fund your existence. I'm sure the mayor of Tualatin loved having his city become nothing more than an afterthought. Actually, it wasn't even that.

Coming soon: The long-awaited series featuring an insider scoop of the CAD/AVL system.
Posted by Unknown at 10:24 AM 2 comments: