Cornelius Pass is the 148th Ave of the Westside. It should have a bus line on it, but it doesn't. According to my concept map of proposed TriMet service improvements, it will.

Cornelius Pass Rd is one of the main north/south routes in Washington County. Named for the very dangerous pass that traverses the Tualatin Mountains north of Sunset Hwy, the road has evolved over time and continues to grow as the area around it blossoms.
It started out as three different roads: Cornelius Pass from Hwy 30 to Cornell, 216th Ave between Cornell and Baseline, and 219th Ave from Baseline to TV Hwy. In 1996, the intersection with Baseline Rd was redesigned, and the Cornelius Pass name was extended all the way to TV Hwy. There have been quite a few tumultuous construction projects on the road, such as widening the road south of Baseline twice, replacing the bridges at Beaverton Creek and Rock Creek, and now widening the road to seven lanes between Cornell and Sunset Hwy. Now it is a rather busy road, connecting homes, apartments, businesses, retail, and schools.

Cornelius Pass and Brookwood Pkwy are the only major north/south roads in Hillsboro that go from Hwy 8 all the way to Hwy 26. TriMet has always maintained that Cornelius Pass isn't a good candidate for transit because of the lack of connection to MAX. That's silly. One could make the same case for Murray Blvd, but they got around that hurdle, didn't they? If you add one north/south bus line at Brookwood (or Brookwood and 229th, as I designed it), you are still left with only one north/south line from SE 10th to SW 185th. 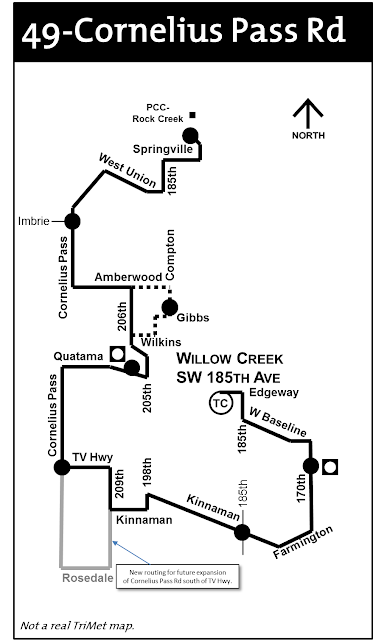 This bus line would start at PCC-Rock Creek and travel down West Union Rd to Cornelius Pass, providing access to the West Union and Rock Creek communities north of Sunset Hwy. (There used to be rush hour service there on the old Line 89, but that went away years ago.) The bus would then cross Sunset and pass the Sunset Fred Meyer shopping area, crossing Evergreen (Line 46) and Cornell (Line 48), serving the east edge of the Orenco district.

So how do you get to MAX you ask? Simple logic. Turn the bus on Amberwood Dr just south of Cornell, a direct shot to NW 206th Ave. Taking the bus to 206th would not only provide access to Quatama MAX station and all its surrounding apartments, but also the AmberGlen business district that Hillsboro is so gung-ho on developing (they have even proposed a cable car circulator, which TriMet has never sounded too excited about). After stopping inside the now currently unused bus bays within the Quatama Park & Ride, the 49 would travel west on Quatama Rd back to Cornelius Pass. This would mean that the entire time the bus was not on Cornelius Pass Rd it would be serving something. And by something, I mean the thousands of people who live in the homes, townhouses, and apartments in the AmberGlen and Quatama districts.

Now we take the bus down Cornelius Pass straight through to TV Hwy. This is where my great ideas came to a halt. What do I do now? Simple: take TV Hwy one-half mile east to 209th, and turn right, making a quick trip to Kinnaman Rd. This oddly diagonal road is the main east/west route between TV Hwy and Farmington. Along it are Aloha High School, Mountain View Middle School (a block away at Farmington), Kinnaman Elementary School, Farmington Center Shopping Center, and the Edwards Center, a home for people with developmental disabilities. Maybe the road isn't as high profile as Cornelius Pass, but it's as important as any road in Aloha. This road would produce many more riders in the South Aloha area. During late hours, Sundays, or the like, the route could turn around at TV Hwy and Cornelius Pass via Johnson and 214th Ave.

AmberGlen
This section of the route is historically important, and is in fact the reason this new line is numbered 49. You see, when Westside MAX opened in 1998, TriMet began service on a route called 49s-Willow Creek (when they used 's' for shuttles and 'X' for express lines). Within two years, they re-routed the line to Quatama MAX station instead of Willow Creek (see TriMet's old page for it here), and it became the 49s-Quatama. This bus served the AmberGlen corporate park that was in development, but the corporate part kind of peaked well before it was completed and ridership never lived up to expectations. So in 2003 they eliminated the line.

Though the business complex growth leveled out, and almost died out during the recession, the City of Hillsboro had other plans. They saw AmberGlen as a major community development opportunity (see this for details). Their dream looked like the intermingling of business, multi-format residential, and even an OHSU facility. They have started building some homes in the area now, but nothing as substantial so far as their grand vision.

However, considering the improved economy and the overall growth of Hillsboro over the last ten years, AmberGlen is as good as any for a spike in growth to take place. And this Line 49 can work right in the heart of it. The bus would travel down 206th Ave all week, but notice the dotted lines on the map for my new line above. This represents a rush hour side-routing that could be taken every other trip or so, or even a quick loop that could turn right back to the MAX station a few times. It covers all the area that was served before while continuing to place an emphasis on the residential areas nearby.

South End?
Notice that I didn't say anything above about where the line ends on the south end. That is because I really don't know. The line would take Kinnaman to Farmington, and then there are a few options. You see, I designed the line before TriMet released their concept map of the Southwest area, which included the extension of Line 67 from Merlo Rd to Tigard TC via 170th, Hart, 155th, Brockman, 125th, and Walnut (or in my plan, Gaarde). My plan took Line 49 to Willow Creek via 170th and Baseline, as shown in the map above. Obviously, if the 67 were extended, this would be a lot of redundant service on 170th, a road with a lot of life to it but not necessarily enough for two bus lines for that length of the road. I love my old 170th plan for the 49, but that its terminus would probably have to be reworked. The best idea so far that I have is to take the 49 down Farmington to 160th, which would become Millikan and have it end at the Millikan Way Park & Ride. This in itself is a very decent plan, but more study would have to be done to determine if it would be cost-effective and would generate enough ridership.

Expansion
Have you ever noticed that large field south of TV Hwy near Harvey the giant bunny? That has always been outside of the Urban Growth Boundary (UGB) and no one could develop it. However, Hillsboro has annexed it and is now ready to start work on the new South Hillsboro community they have planned there. Basically, they will extend Cornelius Pass Rd to Rosedale Rd, and many of the other through-roads on the west and east will converge at Cornelius Pass. Over 8,000 new residences are planned for this area. (See Hillsboro's page about it here). My plan is to take the 49 from Cornelius Pass to Kinnaman via TV Hwy and 209th, but it is designed to take this new area into consideration. The bus could be re-routed down the new Cornelius Pass extension all the way to Rosedale and back up 209th, which would create good transit access for all those houses off 209th also. Or, as one of their concept maps shows, take Cornelius Pass to Kinnaman, and turn left (seems too simple...). Either way, this flexibility would do a large part to make the 49 a successful and thriving bus line for years to come. Turns out that Hillsboro is going to break ground on the Cornelius Pass extension this summer, so these plans for the area all may change before the bus even goes into service!

Think I may be being a little too passionate about one road? No. I've spent my whole life watching this road grow. It's time to give it the bus line that it deserves.

Do you have any questions or comments? Email me at comments@transitriderpdx.com with any input you may have. Also, if you like anything you see here and want TriMet to hear about it, you can email them and reference my ideas (or submit ideas of your own) at future@trimet.org.